eNews Full Article
by
0
0 Comments
Shoe-per-men save the day Like the fictional character Superman, over 80 London and area men used their powers for good in the 9th annual Walk a Mile in Her Shoes® for Women’s Community House on Sunday, September 18, 2016. At 12:30 p.m., under sunny skies, walkers led by the Mocha Shrine Band took to the roadways in downtown London in red high heels to walk once around Victoria Park to raise just under $32 thousand for Women’s Community House. Some men walked as individual walkers; others brought along a fellow walker for moral support. And some men organized a team. They brought their partners, daughters, sons and mothers to cheer them on. They are from all walks of life and all ages. For the most, part it’s one big group of strangers. 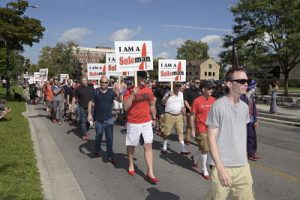 The one common denominator that brings this group of male strangers together each year is their genuine interest in doing something tangible to support and assist abused women and their children in their community. Our London walkers are not alone. The Women’s Community House walk is part of an annual international event founded in 2001 by Frank Baird in Van Nuys, California. What started out as a small group of Californian men daring to totter around a park in red heels has grown to become a world-wide movement with tens of thousands of men raising millions of dollars for local domestic violence shelters and rape crisis centers. In 2016 across the U.S., there are walks just like Women’s Community House’s Walk a Mile from Anchorage, Alaska to Corpus Christie, Texas and from Santa Cruz, California to Nantucket, Massachusetts. There are walks in Kampala, Uganda, Amsterdam, Netherlands and Perth, Australia. In Canada, there are 31 Walks coast to coast from New Brunswick to B.C. Women’s Community House brought Walk a Mile in Her Shoes® to London in 2008,  the second shelter in Canada to sign on to this ever-growing movement. In total in 2016, 212 walks are taking place world-wide. Mark Elliott surpassed all other individual walkers with over $2,600 in pledges and was awarded the Shoe-per-hero award for the second year in a row. Syd Floyd, a veteran walker, was the individual ‘walker-up’, raising over $1,900. The WCH House Team retained the coveted Shoe-be-do trophy by raising over $5,300 with the Team walkers-up’ being Team Peaceful Men In Pumps with $1,741 in total pledges and Team Scotia with $1,455 in total pledges. 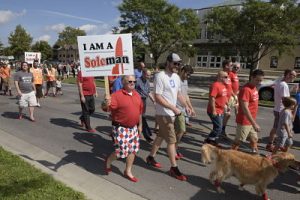 A huge shoutout to all our 2016 Walkers who collected pledges to support Women’s Community House, who donned red heels and ‘walked a mile’ to raise awareness of violence against women, and to all who supported the Walk through financial donations, through cheering the Walkers on from the sidelines and through volunteering your time. We are very grateful to each of you who made the London, Ontario 2016 Walk a Mile in Her Shoes® event a success. The 2017 Walk a Mile event in London is ‘under construction’. Please watch the WCH e-News, the Walk a Mile London website, the WCH Facebook page and the @Womens_Communit Twitter feed for exciting news about next year’s event.

A Message from our Executive Director